History of the Black Catholic Church in the Louisville Community 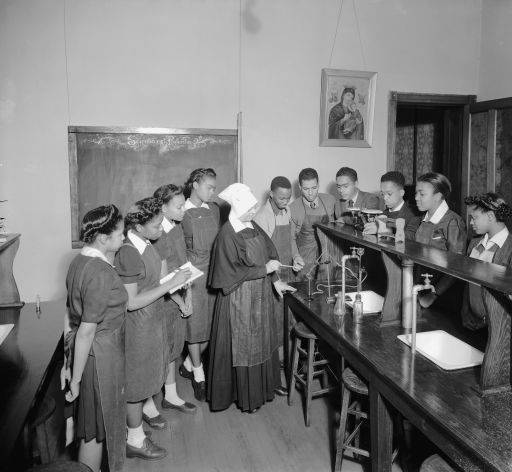 My maternal grandfather and his family were devout Catholics. My great (x5) grandfather was a white Irishman named Gus, who was also Catholic. Yet and still like many Black Americans, I wasn’t raised in the Catholic church. According to pewforum.org, nearly 8 out of 10 Black Americans identify as Christian. However, there are currently 3 million Black Catholics in the United States and some of these people and churches have a history in the West End of Louisville.

The first Black American Catholics were slaves who arrived in Kentucky with the settlers from Maryland in 1785. St. Augustine Catholic Church, located on 1310 W Broadway, is the oldest Black American Catholic church in Louisville. The original location (located between 14th and 15th street) opened in 1870 and at the time it was 1 of 6 Black Catholic Churches in the United States. Today, the church has over 500 parishioners and continues to host important events for Black Catholics. Some of which include the National Convention of the Knights of Peter Claver, the Mid-Eastern Conference of Negro Welfare, music workshops and retreats, and the Slice of St. Augustine event.

Under St. Augustine Church was St. Augustine School. Opening in 1921 the school’s name was later changed to Catholic Colored High School. It was the only Catholic high school for Black Americans in Kentucky. The school closed in 1958 due to integration. Nazareth College, which is now Spalding University, was a 4 year Catholic college for women and the first institution in Kentucky to offer degrees in Library Science for Black American students. It was founded in 1814 by the Sisters of Charity of Nazareth.

Black Slaves, who were often forced to take on the religions of their owners, helped build some of the oldest churches in the Archdiocese of Louisville. Even so, they were relegated to the back pews of Catholic Churches and could not receive communion at the main altar. Amanda Gorman is the youngest poet to ever perform at a presidential inauguration. Being a Black, Catholic, woman, the poem she recited at President Joe Biden’s inauguration, “The Hill We Climb,” can be applied to far more than just celebrating the transition of a new President. As we approach St. Patrick’s Day, let us not forget the Black Catholics who contributed to the parishes of today and what contributions they have made in past and present history.