A Grateful Goodbye: Sam Watkins Jr. Reflects on His Legacy for LCCC 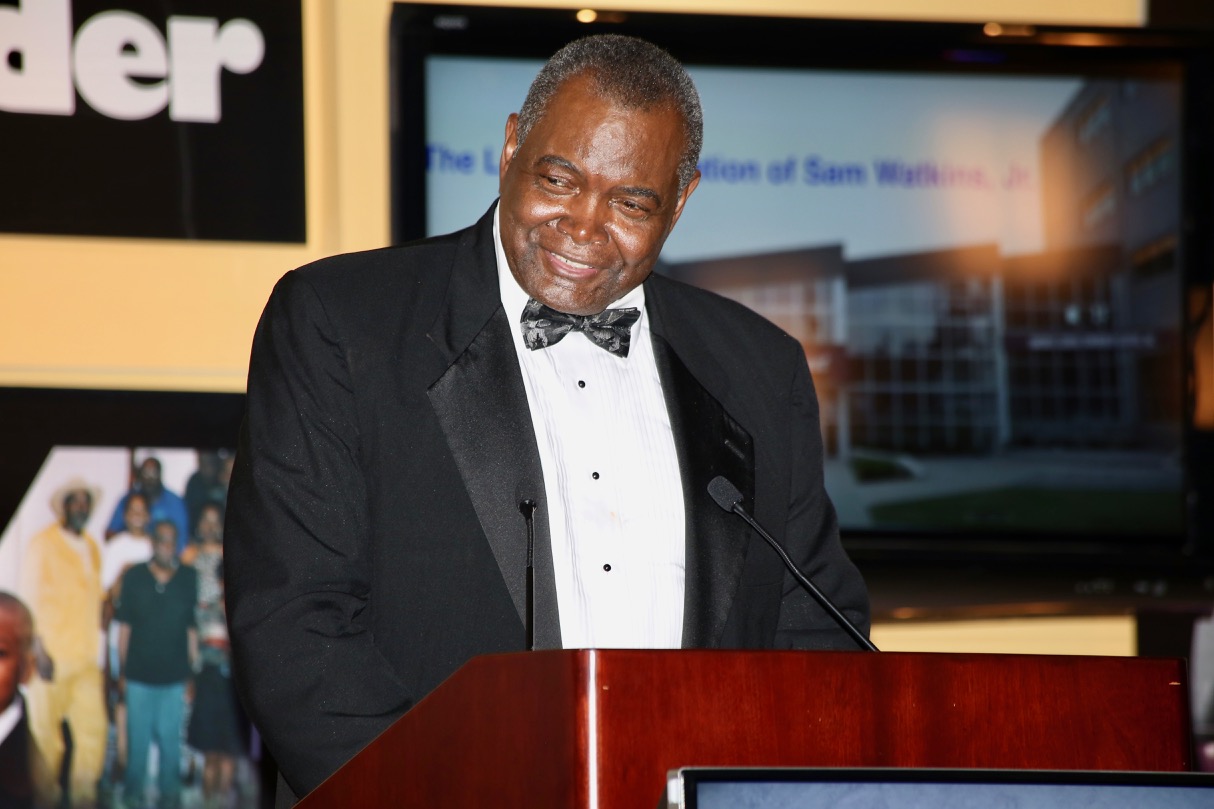 On Thursday, May 18th, 2017, the Louisville Central Community Center honored its leader, Sam Watkins, Jr., who has recently retired after 28 years of leading this non-profit as President and CEO. Sam\’s leadership, vision and staunch advocacy for Russell and all of West Louisville has placed LCCC at the center of many of the promising recent developments in that area, including the Old Walnut Street project, the $30 million Choice Neighborhoods grant to transform Russell and the Muhammad Ali Arts & Cultural District initiative.

During this special evening, LCCC highlighted some of those accomplishments and celebrated Sam\’s profound legacy at LCCC.

We took a few minutes to speak to Sam about his accomplishments and legacy, and he gave us some interesting perspective, as he looked backward into his time with us.

He became president and CEO in 1987, at a time that LCCC was looking at going in new directions, beyond after-school programming. At that time, about 800 families were active in the community tied to LCCC. Sam had spent his early career in real estate development, participated in Louisville projects as an entrepreneur, and he earned a Master’s degree in community development. He wanted to take a different approach to poverty in the Russell neighborhood. An economic development approach.

“I always wanted to help people. I got my wish to have 28 great years surrounded by great people and a marvelous staff. You always believe you could have done more, but we accomplished a great deal in our journey together, and the accomplishments are obvious in the community,” Sam said. This economic development mission moved into reality quickly and services were expanded that now touch 3,000 families in 2017, of which 70 percent are in the Russell Neighborhood.

“We wanted to move into looking at childhood well-being and healthy outcomes and we moved into expanding our family services with early childhood development and pre-school programming at two state-licensed facilities, moving further west to accomplish this,” he said.

In 1995, the Kid’s Art Academy was born at LCCC, a program still very active today. By 1998, the building campaign was formed to buy what is now the LCCC headquarters, on the Old Walnut Street campus.

Then, Sam explained, LCCC took a focus on building more adult services for family leaders in workforce development. The Working Solutions program you know today was started with Sam’s initiative, with a specialized training focus on math and computer literacy. A GED program was built to serve LCCC members, which impacted more than 100 adults in its years of operation. Now much of that training is handled online.

Under Sam, funding was expanded to include more foundations and private donor inputs. The board as expanded even further as growth took off after the year 2000. At that time, Sam added key programs such as the Kindergarten Readiness training, and job fairs for adults. The true focus of LCCC entering 2005 and beyond has been economic development, advocacy, workforce development, childhood education, and housing development.

Since 2000, LCCC started the E-Learning Olympics for teens and thousands of youth have been touched by this program. “It really has been a transformational project,” he said.

LCCC Timeline Snapshot:  Sam\’s Legacies
Here is a timeline for perspective on where LCCC has travelled under Sam’s direction:
1992 – Established its family and children services program to the Village West Mall to help jumpstart a renovation of the development, after it had fallen into disrepair.
–Secured a $100,000 grant from the U.S. Department of Agriculture for inner city youth to improve the neighborhood environment through the planting of trees.
–Established a community development corporation (Louisville Central Development Corporation) to support affordable housing and economic development, leading to the construction of over 84 new homes in the Russell neighborhood in the late 1990s.
1995 – Partnered with ElderServe, Inc. to build the Oak & Acorn Intergenerational Center in Russell.
LCCC Mini-Versity West Child Development Center was opened at Oak & Acorn in the fall of 1995.
1996 – LCCC/LCDC received Small Business Administration (SBA) designation as an intermediary lender on behalf of our Business Plus micro-enterprise program and was awarded $1 million over a two- year period (1996-97).
1999 – LCCC/LCDC received Community Development Financial Institution (CDFI) certification.
LCCC launched Phase I $3.6 million Old Walnut Street Development capital campaign to improve child care facility and construct the headquarter building in Russell neighborhood.
2002 – Renovated and expanded LCCC Mini-Versity at a cost of $445,000, as part of Phase 1 capital campaign.
Acquired LG & E building at 550 South 13th Street for future headquarter site.
2003 – Acquired the old International Harvester Building/Peters Moving & Storage Co. property at 1326 W. Muhammad Ali Blvd. for future headquarter site and job creation.
2006 – Secured national grant of $500,000 to kick –off a $4.5 million Old Walnut Street Phase 2 capital campaign to renovate headquarter facility at 1300 W. Muhammad Ali Blvd.
2010 – Construction of headquarter site began with the construction of the 6,000 sq. ft. connecting atrium.
2011 – Construction of the business incubator and second floor headquarters site began.
2012 – Worked with the University of Kentucky School of Landscape Architect to develop a visual presentation of a vision for the Russell neighborhood.
2013 – Moved to headquarter site.
–Supported the Louisville Magazine’s Special West Louisville edition of Stop Ignoring the West End. Due to demand, sponsored a second publication of the edition.
–Announced LCCC’s Vision for the Russell neighborhood that includes enhancing economic vibrancy with a stronger connection to the Central Business District. This includes redeveloping Beecher Terrace as a mixed-income residential/commercial development.
–Made vision presentations at Leadership Louisville’s town hall meeting at the Kentucky Center for 300 individuals.
2014 – University of Louisville’s School of Public Health & Information Sciences co-located to Old Walnut Street.
–An additional $600,000 is raised to construct the 9,000 sq. ft. LCCC Family Strengthening Center.
–Began collaborative work on the Vision Russell Plan led by Louisville Metro Housing Authority.
2015 – Sponsored the national SDAT study by the American Institute of Arts in Washington DC.
–Celebrated the grand opening of the LCCC Family Strengthening Center with the Ed Hamilton Arts Show.
2016 – Announced recommendations of the SDAT study that includes the creation of an Arts and Cultural Commercial District in Muhammad Ali Blvd. starting from 6th Street to 21st Street.
Hosted the morning session of the formal site visit by federal HUD in response to the city of Louisville being a finalist for a $30 million transformation plan for the Russell neighborhood.
Celebrated the announcement of the Vision Russell Transformational Plan grant approval of $29.5 million.